Sometimes what we want is not what we expect. Often it’s not where we expect to find it. Nevertheless, it pays off to stick to our true goals. Here’s why… 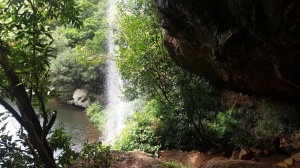 During our first weekend in Mauritius we went to see Tamarind Falls in the south-west of the island. T. chose the destination and I read reviews online. Most people were saying it’s a difficult route and it’s best to get a local guide who knows the way (at least that’s what I’ve remembered from the posts, T. had a different impression!). Guided tour was a bit too expensive as for our liking, so we’ve decided to try and go on our own.

We put the location into our sat-nav and, with some help of the locals, got there relatively easily. Finding the way to the waterfall itself was a bit of a challenge though. First we went to the Tamarind reservoir (very peaceful and beautiful by the way), then a security guard instructed us to take the road opposite the temple, so we did (you can see the temple below). 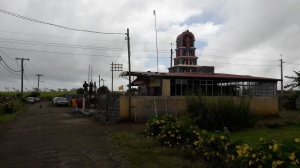 When we progressed further, there was an obscure path to the forest that looked more like a rainwater way, and was quite steep, so I didn’t feel comfortable to take it (= I was scared:)). I said There must be some sign or a bigger path surely, people are walking here often. We walked a bit further (like 15 min further) following the road along a sugar cane filed. That wasn’t the right way, so we’ve decided to go back to the temple and try a path that we’ve seen close to where we started. Well, it wasn’t the right one either but we did find an interesting ‘meeting point in the jungle’: 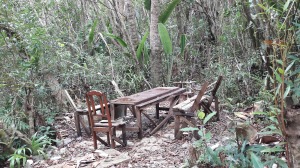 Finally, when we got out, back to the ‘main road’, we met another traveler who pointed us in the right direction – it was the first, difficult path.

It was like proper jungle down there, the path was steep and wet at places and we had to literally hang on to trees and jump on rocks to keep going. We had to climb up and down, go over and under a waterfall and do some other acrobatics to see the 4 out of 7 cascades. But we did it and it was SO worth it. The waterfalls are beautiful and wild. We were actually in a jungle, in the middle of some sugar cane fields and I felt so close to nature, in that rough, primal sense. I was scared on the way to the falls and could only relax on our way back but if I didn’t do it, I would have missed so much beauty and happiness…

How often do we give up, lose hope and stop working towards our goals because life gets hard? Because we lose faith in ourselves? Because we compare our ‘results’ to other people’s and feel we are not doing good enough? All these things stop us from reaching our full potential!

Everyone is different, so there are dozens of explanations to why we don’t reach our goals but for me the biggest show stoppers are:

When things don’t go the way we want and it seems like our goals are getting further away from us, it’s OK to feel disappointed and sad. It’s OK to cry and scream (just not at other people). As long as we have ‘our moment’ and then reflect back on what happen and why. We can check with ourselves if we still want to do what we’ve originally planned and if yes, keep going. You can’t always get what you want but if you try, sometimes, you get what you need.